The village of Poljane is situated in the heart of the Poljane valley. In some documents the village was mentioned as early as 1160, but supposedly it is even older than that. In the past  the inhabitants used the flatlands for agricultural purposes, while the slopes were used for settlements. The village was thus built on two opposing hills – Tabor and Grič. A fortress is said to have stood on the top of Tabor once. The stones from those ruins were supposedly used to build a baroque church in the middle of the village. The church was designed by the architect Gregor Maček. Poljane was the clerical centre of the valley from the 13th century onwards. During World War II the church was damaged heavily and had to be demolished after the war. 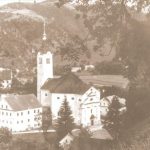 The first school was built in 1778, so that the most talented children could be educated. In such a manner some of the most famous Slovene artists came from Poljane. One of them was Ivan Tavčar, the author of many short stories, including the famous “Cvetje v jeseni” (Flowers in the Fall). He also wrote the widely-known novel “Visoška kronika” (The Chronicles of Visoko). But it was Ivan Šubic who really ensured fame for this region. It all began with Štefan Šubic, a carver and an iconographer, and has continued up to the present day with the modern painter Maja Šubic. She persists in the old fresco tradition, but also experiments with different ways of expressing herself through this difficult painting technique.

Until World War II Poljane had been the centre of the valley, which was also named after the village. In the past, the predominant industries were agriculture, leather industry, bakeries and other country crafts. In the 20th century tourism also started to develop by the unspoiled and warm river Sora, but because of the industrial development it soon died out.

After World War II the inhabitants were employed mostly in the refrigerator company in Škofja Loka and the company Termika in Poljane. Many people also commuted to Gorenja vas and Žiri. 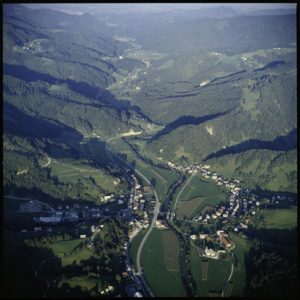 Today about 400 people live in Poljane. With the establishment of settlements from Tabor to Dob and up the regional road, the settlement expanded; a new school and a kindergarten were built. Next to the old school two successful companies developed, Polycom and Quick Engineering.