The History of Education in Poljane

There is not a lot of information about the school in Poljane till 1880. The oldest boys’ school in the area was founded in Škofja Loka in 1627, in Poljane in 1785.

1866/67: A classroom was settled in a sacristy, the sacristian was a teacher at the same time.

1880: A house was bought and transformed into a school building.

1883: The first books for the school library were bought.

1879−1918: Due to different of health problems of students and employees classes were interrupted eight times.

1899: It was decided that a new school would be built.

1899/1900: There were 456 school-age children in Poljane but only a minority attended classes.

1893/94: The system of repetitive school was introduced.

1840−1903: A book where the most successful pupils were recorded, called “The Golden Book” was introduced, and the names of painters Janez and Jurij Šubic as well as a writer Ivan Tavčar were noted down.

1905: Lessons started at a branch school in Malenski Vrh – twice a week.

1906: At Poljane school a class for pupils from remote places was organized twice a week. 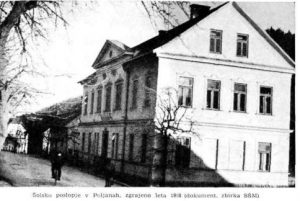 1908/09: The school was expanded into a three-year school and the class for pupils from remote places extended to two classes.

Classes were greatly obstructed during World War I.

1926: Classes were interrupted due to a large flood.

1927: The number of schoolchildren decreased and the school turned into a four-year school.

1929: Lessons were interrupted due to a very severe winter.

1930: The repetitive school was joined to the ordinary fourth class and the school became a five-year school again.

1935: Skiing lessons for schoolchildren were organized.

1941: The school was a seven-year one with one class for remote children.

At the beginning of World War II Germans started German language courses for adults. Lessons at school were also in German from December 1941 till July 1943.

1944: The school building was destroyed by fire.

1945: There were 186 children in five classes. Lessons were held in private houses in Poljane and Malenski Vrh.

The school year 1970/71 was the last year of an eight-year school in Poljane. There were around 200 schoolchildren.

Till 1980 the birth rate had been decreasing but from that year on it started increasing again.

1986: A new branch school building was built at the present location and lessons started in December 1986.

A painter Ive Šubic started working working on a five-piece fresco with the help of two arts students, his daughter Maja Šubic and Gigo de Brea. 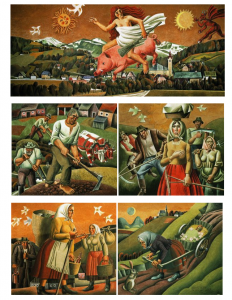 The frescoes by Ive Šubic in the school hall

1987: The first two groups of pre-school children started going to the kindergarten adjacent to the school.

1997/98: An eight-year school was founded and the school building extended, which enabled 322 pupils to attend lessons. A branch school in Javorje had 39 pupils and the kindergarten 61 pre-school children.

2003/04: A nine-year primary school was introduced, the school obtained the title of EKO school.

2012/2013: An electronic markbook and a class record book were introduced, energy restoring of the school building was completed.

2017/18: A new, safer traffic order was introduced on the west side of the school building, with a bus and van stop for pupils, a roundabout included.